So its definitely onesie weather! When its this cold you absolutely need a warm dessert to round off a meal and let your body know its time to wind down to go to bed. And who knows how to make a quick, warm, comforting dessert better than anyone? Nigella does. After a dinner of roasted veggies, I thought i’d try the Chocolate Pear Pudding from the Nigella Express cookbook. Partly because I love the chocolate/pear combination, mostly because I wanted something super quick and easy! (And also I think the little pear halves look really cute laid out on the bottom of the pan!) 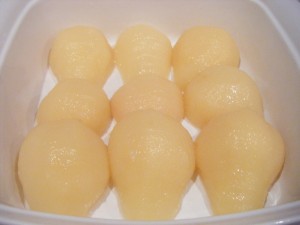 True to the book it came from, this recipe is truly a scrumptious dessert made the express way. I was worried that the cake batter was too thick to produce a moist cake but, trust in Nigella, for only she can show you the true way to amazing desserts. (Don’t worry, I haven’t lost faith in The Saint, but Nigella really is the queen of the quickie dessert.) 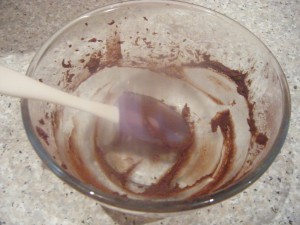 Who gets to lick the bowl? I do!

This was about the time in the process I managed to get a smear on my camera lens. For the record (you can probably tell) I don’t use a fancy camera, just my mums mini point and shoot digital camera. I think “learn how to use a proper camera to take proper pictures” should be quite high on my to do list. It took me ages to actually figure out that it was a smudge on the lens that was distorting the middle of my pictures. Oops. 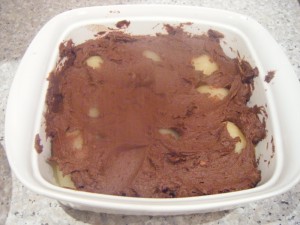 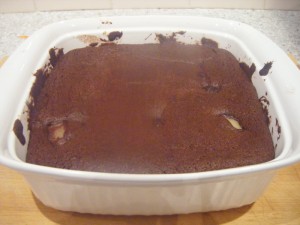 So my lovelies, what is your favourite warm dessert to have on a cold and windy night?

2 cans pear halves in juice (you can alternatively get one giant can, I found the pear halves in the big can to be bigger than the ones in the two smaller cans. Whatever floats your boat)

150g soft butter (Nigella recommends using extra for greasing, but I didnt grease my pan and it still turned out fine)

1. Drain the pears and lay them on the base of your baking dish

2. Blend all the remaining ingredients until you have a batter (it will look quite stiff, don’t worry!)

3. Spread the batter over the pears (don’t worry if there are some little pear bottoms sticking out of the mixture, they will probably get covered up as the cake rises and even if they don’t, they wont burn)

4. Bake in the oven for approximately 30 mins, make sure they aren’t burning! (I prefer to undercook rather than overcook as you want the batter to be gooey and saucy rather than a fully risen cake)

5. Let the pudding stand for at least 5 mins, the pears and sauce will be very hot straight from the oven and you don’t want to burn your tongue!