I have been very remiss with my blog this month. This year seems to be a very complicated year with each resolution being followed swiftly by a new problem that needs solving asap. This month has been a massive learning curve with mountains of marking, gale force winds, important birthdays and general stress! I think the most shocking lesson to learn was that somehow when I was sleeping words such as LOL, TTYL, TTYL and TTIF have entered the adolescent vernacular. I know that these are abbreviations, but apparently they can be pronounced as actual words. After spending five days in the wilderness with fifteen teenage girls, I feel well versed in the art of teenage conversation! So after being immersed in a culture that has changed dramatically since I was a part of it, I felt I needed to cook something buttery, sweet and slightly squidgy to make up for my general sense of confusion! Thank you Donna Hay for providing a beacon of light to guide and sooth me as I attempt to navigate the confouding morass of teenage popular culture. 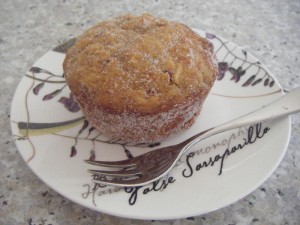 Hail Donna Hay, creator of the

I had a bunch of pink lady apples that were on the verge of turning and were lightly too squishy to be eaten by themselves. This recipe made short but tasty work of them! The batter was very wet and sloppy but this made for light but moist cakes. Due to my extreme laziness the amount of butter in the recipe I didn’t even grease the pan and they mostly came out well. If you want the presentation to be perfect though, I would consider greasing the pan thoroughly or even using patty pans as I did have some breakages. 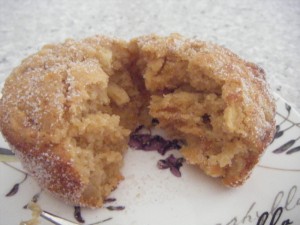 These are best eaten warm from the oven, so that a little puff of steam escapes when you break them open. You could serve these with cream or ice cream but in my opinion they stand alone and work well as a tasty snack. You can use any kind of muffin pan to cook them in, I cooked them in a large 6 hole texas muffin pan to begin with. Then I decided that Cinnamon Sugar-Coated Maple Apple Bars would be a good idea, so I made them in a mini loaf tin! 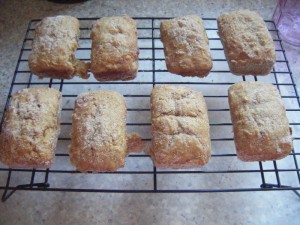 Yes, I didn’t grease the pan again. Yes, they broke. Badly. But on the upside, it meant that there were little crispy pieces of yummy buttery cake left in the pan for me to nibble on. And what could be wrong with that?

You could omit the final dousing in sugar and cinnamon and still have a delicious cake. But in my opinion, that would be like having a hot chocolate with skim milk. Why would you do that to yourself? If you’re going to eat a cake, it may as well be the tastiest cake you can lay your hands on. At least thats my argument and im sticking to it!

So, my lovelies, what is the strangest word you have heard recently being used in common conversation? Is it as strange as when one of my students told me that something was so funny that it was a “LOL-cano”? A volcano of LOL.

6 red apples, peeled and grated (I had 7 or 8 but they were quite small, I dont think it really matters how many apples you use it will just be more or less appley according to the amount)

1. Place the flour and cinnamon in a bowl and mix to combine

3. spoon into twelve well greased 1 cup capacity tins (Donna Hay uses bundt tins but you could do anything) and bake for 20 mins at 180 degrees celsius. If you are using a different type of tin keep checking your cakes as they might take more or less time

4. Turn out of the tins immediately and coat the cakes in extra cinnamon and sugar

5. let cool for a little bit but eat while still warm!