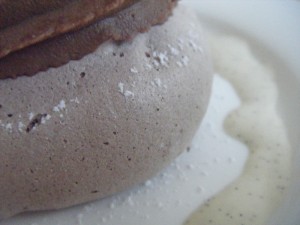 The June 2010 Daring Bakers’ challenge was hosted by Dawn of Doable and Delicious. Dawn challenged the Daring Bakers’ to make Chocolate Pavlovas and Chocolate Mascarpone Mousse. The challenge recipe is based on a recipe from the book Chocolate Epiphany by Francois Payard.

Ok. So you had me at “Chocolate”. Then you had me drooling at “Pavlova”. By “Mascarpone Mousse” I was on the floor in raptures! The Chocolate Gods are certainly smiling down on me.

As it needed time to chill, I thought I would make the Chocolate Mousse first. I did attempt to make my own mascarpone a day or two after the challenge was posted. While it went ok, I just didn’t have enough time to make enough for this recipe. Definitely something I’m going to do now that the holidays have started though! 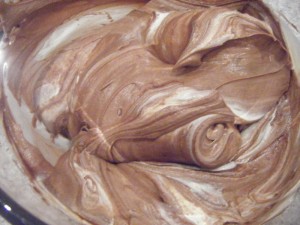 Folding the chocolate into the mascarpone and cream mixture.

(I was so happy during this process I almost fainted!)

Next step was the Chocolate Pavlova. Now Pavs are a bit of an Australian specialty. Particularly after Donna Hay’s Pavlova was featured in one of the first episodes of Master Chef. While I have been experimenting with pavlova and meringue lately, I have to say that i’ve never tried a chocolate pav! Absolutely something that needed to be rectified! 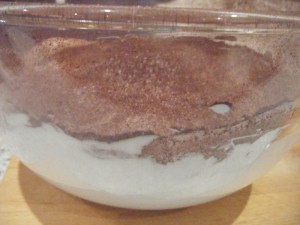 Mmmm look at all that lovely cocoa, ready to be folded into the meringue mixture

It was all looking good. I shaped the mini pavs on a baking tray and it seemed as though I was traveling well until something knocked the wind out of my sails. 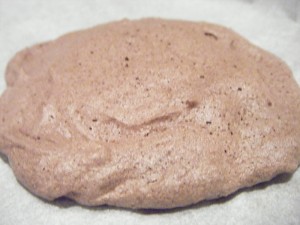 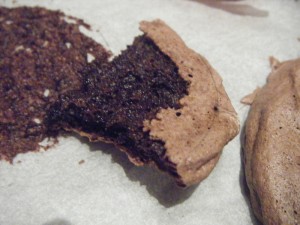 I’m not sure what went wrong with these but they just lost their shape. They tasted ok but were not what I was trying to do. So what do we do when something like this happens? Try, try again! 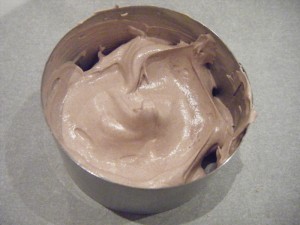 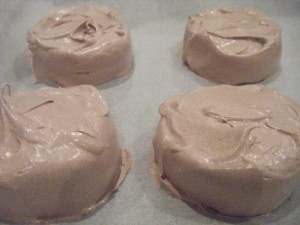 I’m finding it harder and harder to stop myself from eating the raw mixture. its just so damn tasty and don’t these just look so yummy? I was a little bit naughty and added some cornflour and vinegar on the advice of Womens Weekly. But hey, it worked! 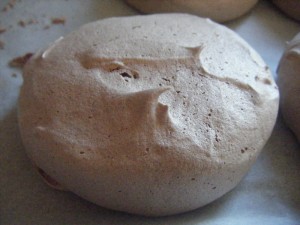 Not only did they look yummy, but they were extremely successful! Yay!

Now, i’ve been a bit lame this month and somehow forgotten to take progress shots of my creme anglaise and mascarpone cream. Sorry! The process wasn’t particularly difficult or exciting, just a bit of stirring, a bit of sifting and a bit of folding. When I put it all together, I had something that looked like this… 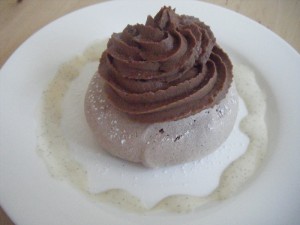 and far out… it tasted gooood. With an emphasis on the “ooo”! 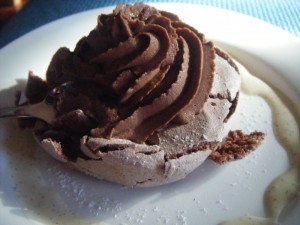 The best part was cracking the shell to get to all that chocolaty, marshmallowy goodness.

Yes, Chocolate Gods, I must have done something right. Word to the wise: you need a fork and a spoon for this one! I have so many different ideas of what to do with the chocolate pav, chocolate mousse and mascarpone cream. Expect some good things with these components in the next few weeks. Thank you Dawn, this recipe was both doable and delicious, not to mention inspiring! You are a star!

Now in conclusion, I want everyone to say with me:

1. Place a rack in the center of the oven and preheat to 200º F (95º C) degrees.  Line two baking sheets with silpat or parchment and set aside.

2. Put the egg whites in a bowl and whip until soft peaks form.  Increase speed to high and gradually add granulated sugar about 1 tbsp at a time until stiff peaks form.  (The whites should be firm but moist.)

3. Sift the confectioner’s sugar and cocoa powder over the egg whites and fold the dry ingredients into the white.  (This looks like it will not happen. Fold gently and it will eventually come together.)

4. Fill a pastry bag with the meringue.  Pipe the meringue into whatever shapes you desire. Alternatively, you could just free form your shapes and level them a bit with the back of a spoon. (Class made rounds, hearts, diamonds and an attempt at a clover was made!)

5. Bake for 2-3 hours until the meringues become dry and crisp.  Cool and store in an airtight container for up to 3 days.

1. Put ½ cup (120 mls) of the heavy cream and the lemon zest in a saucepan over medium high heat.  Once warm, add the chocolate and whisk until melted and smooth.  Transfer the mixture to a bowl and let sit at room temperature until cool.

2. Place the mascarpone, the remaining cup of cream and nutmeg in a bowl.  Whip on low for a minute until the mascarpone is loose.  Add the Grand Marnier and whip on medium speed until it holds soft peaks.  (DO NOT OVERBEAT AS THE MASCARPONE WILL BREAK.)

3. Mix about ¼ of the mascarpone mixture into the chocolate to lighten.  Fold in the remaining mascarpone until well incorporated.  Fill a pastry bag with the mousse.  Again, you could just free form mousse on top of the pavlova.

1. Prepare the crème anglaise.  Slowly whisk in the mascarpone and the Sambucca and let the mixture cool. Put the cream in a bowl and beat with electric mixer until very soft peaks are formed. Fold the cream into the mascarpone mixture.

1. In a bowl, whisk together the egg yolks and sugar until the mixture turns pale yellow.

2. Combine the milk, cream and vanilla in a saucepan over medium high heat, bringing the mixture to a boil. Take off the heat.

4. Remove the mixture from the heat and strain it through a fine mesh sieve into a bowl.  Cover and refrigerate until the mixture is thoroughly chilled, about 2 hours or overnight.