The October 2010 Daring Bakers challenge was hosted by Lori of Butter Me Up. Lori chose to challenge DBers to make doughnuts. She used several sources for her recipes including Alton Brown, Nancy Silverton, Kate Neumann and Epicurious. 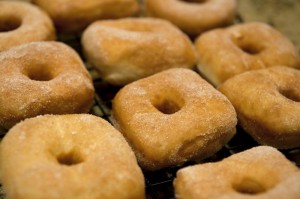 When I was at uni I LIVED on donuts. (Yes, I call them donuts, not doughnuts. Oh well!) Although I have been trying many different recipes I hadn’t even considered making my own donuts until now. Why?

I am not the most graceful person in the world. I sometimes misjudge the width of doorways and bang into the wall. I tripped UP the stairs yesterday. Me in a kitchen with a pan of boiling oil attempting to deep fry donuts was just an absolute recipe for disaster. Particularly considering my near miss with my Brown Sugar Sponge… which my poor stove still hasn’t recovered from! (Does anyone have any more suggestions of how to get the burnt sugar off my glass cooktop?)

Despite the difficulties I was determined to complete this month’s challenge and enlisted the help of the S family. Their bench tops are granite (or some stone that I have no idea about) and their kitchen is tiled which meant that there would be less opportunity for disaster than in my laminated and polished floorboarded kitchen. I would also have four other people on hand should disaster befall me. Phew! (And they had a stand mixer! Hooray!) 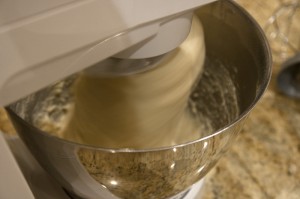 Woohoo! Look at that baby go! Definitely beats doing it by hand!

I did have the difficulty many others had of the dough being too wet. I hate handling overly wet doughs so I must admit that I added flour until I felt it was a good enough consistency. It didn’t seem to hurt the final product though. 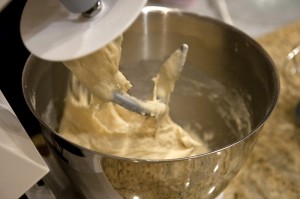 See? Too wet and floppy. 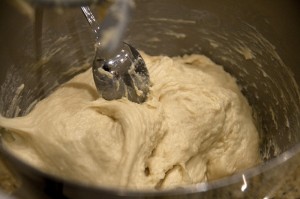 Now still wet but much more manageable. Ready for rising! 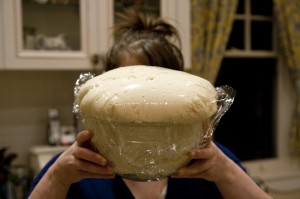 And boy did that sucker rise! 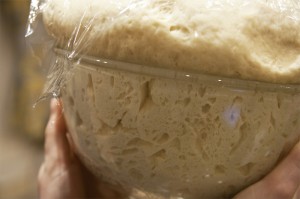 It looked rather like a sea sponge stuffed into my mixing bowl.

Mixing dough? That I can absolutely do. That was the easy part. Now my palms were starting to sweat and my heart was beginning to race. Sure There was stone and tiles, but hey, something could still go wrong. Who knows? I could still set fire to the curtains or something! 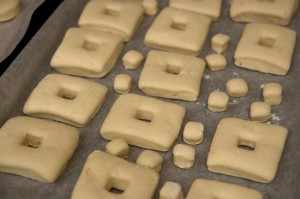 To calm my nerves, we decided to cut the donuts into some different shapes. Squares… 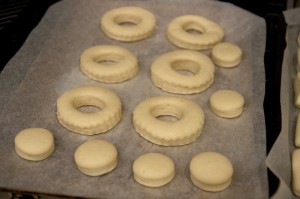 Wiggly rings… and, well, that was about it.

After some difficulties with the temperature, we were ready to fry!

Once the donuts were in the oil it was all plain sailing! I couldnt believe how well they browned and retained their puffiness. The final product before coating in cinnamon sugar had the same consistency as krispy kreme donuts. Hooray! We cooked half the donuts that night and left the rest of the dough to do another slow rise in the fridge.

The next morning the dough had burst out of its cling film armour and was ready to go for round two. We used the same oil to make some more creative shapes. 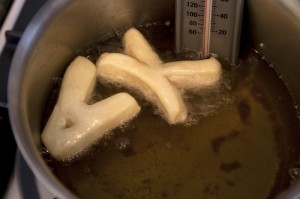 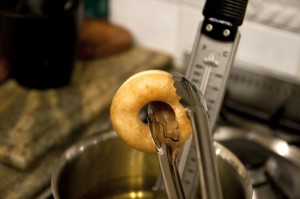 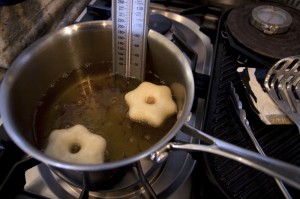 Some stars (which were pretty cute) 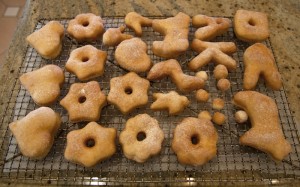 And a whole bunch more! Some hearts… a cow… a bunny…

I don’t know if it was the second use of the oil or the slow rise in the fridge but it seemed as though the donuts cooked from the second batch had a little more flavour to them. They were all super tasty and covered in sugar and cinnamon they disappeared quick smart!

I need to give a massive thankyou to the S family for letting me use their kitchen and to my wonderful boy for taking all my photos. Could you tell? Yes? Perhaps it was the constant focus, clear photos, lack of shadows and poor lighting the list goes on…

This was by far the challenge that has made me feel the most proud for completing. A wonderful challenge with a recipe that I will definitely use again and again! So my lovelies, is there something that you have cooked that has been a major achievement for you? Something you were proud of cooking without burning down your kitchen?