During a lovely night out with the girls, I found myself volunteering to make the Ginger Ninja a Lion Cake for her African themed birthday. Ive bought so much fondant over the years with every intention of practicing making cute cake toppers and decorations and somehow I never seem to get around to it. So today, I bit the bullet. The deliciously sugary fondant bullet! I decided that rather than make a cake that was a lions face, I would attempt to make a jungle cake and perch a cute little lion on top of it. Today marked attempt #1 at fondant cake toppers.

I used a packet of Orchard White Icing that I had left over from Christmas and coloured it with different food colourings. The only difficulty I had was with the softness of the fondant. I found it quite sticky and very very soft so that it was easy to model but often got quite droopy. See exhibit 1 – the Elephant trunk 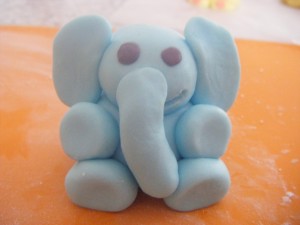 Yes, he looks a little bit wonky but still very cute! I think I need to make the trunk smaller and try to get it to point up. Nothing cuter than a trumpeting elephant! Maybe next time i’ll make my elephant pink (think Nelly the Elephant!).

After the elephant, it was on to teddy bears. I am suffering from an extreme lack of brown food colouring so I thought I would just use what I had on hand. Yellow. Be warned, I think this ted had put away most of my easter trifle into that big belly of his. No more sweets for you big ted! 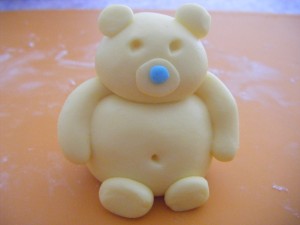 Finally it was time to try a little lion. I had a large amount of yellow fondant still on hand (surprising, considering how fat my teddy bear ended up!) so I decided that this sweet little lion would be yellow with an orange mane. And thus was born Lionel, my little yellow lion! Almost too good to give away…. 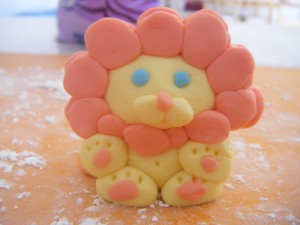 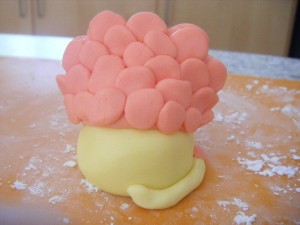 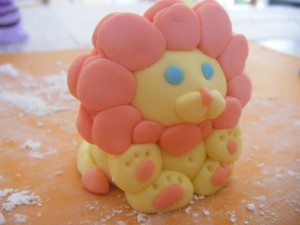