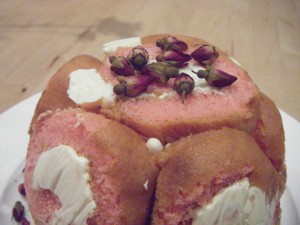 The July 2010 Daring Bakers’ challenge was hosted by Sunita of Sunita’s world – life and food. Sunita challenged everyone to make an ice-cream filled Swiss roll that’s then used to make a bombe with hot fudge. Her recipe is based on an ice cream cake recipe from Taste of Home.

Well, this month was a challenge and a half! Although I have been able to finish most challenges a few weeks before the deadline, some how I found myself pulling this baby together last night in the nick of time. It wasn’t that I found the recipe unappealing (I love ice cream as much as the next woman) but I think I lacked motivation this month in pulling together a recipe that largely consisted of ice cream, in the dead of winter. Some how, trudging home in the cold and the rain after a long day at the chalkface didn’t make me want to complete this recipe. However, this is absolutely something i’m going to pull out when Summertime decides to roll around!

This culinary journey was not without its hiccups. I had considerable difficulty with the initial swiss roll recipe. For reasons unknown, no matter how closely I followed the recipe the damn thing would not rise! I made a few batches of flat, rubbery swiss rolls before finally baking my end product. After reading a few different recipes I decided to try whipping the egg and sugar mixture over a double boiler. Finally, I had the thick, creamy consistency required by the recipe. Finally, I had a light, spongy swiss roll! 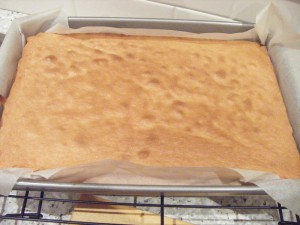 And of course, my first alteration to the recipe was to make it a different colour… 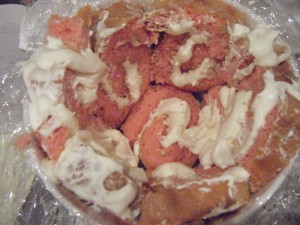 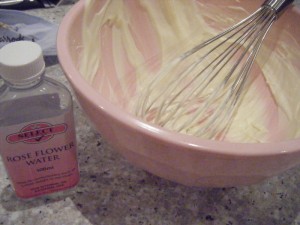 Rosewater! P.s. I  whipped that cream by hand baby!

I had to go with chocolate sauce for the middle because I couldn’t for the life of me figure out a sauce to go with rosewater ice cream. 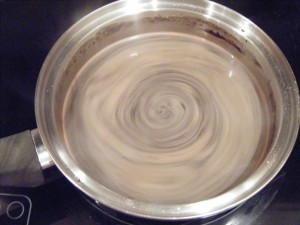 I have to mention here that I did find the sauce mesmerising. It was like looking into a swirling galaxy 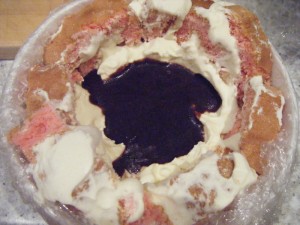 Next came the final layer of ice cream. But what flavour to go with rosewater? I have to admit that I did cop  out a little bit in this section. I thought that pistachio ice cream would go nicely with the other flavours in this cake. However, I decided to make this ice cream on a night where I was just too tired and over it to do a good job. So I blended up a bunch of pistachios and whacked them in the ice cream. 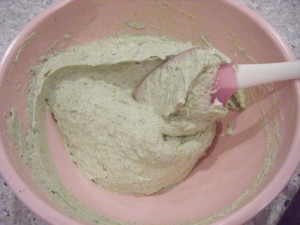 While the texture was a little grainy as a result of my laziness, the flavour was delicate and pistachio-y 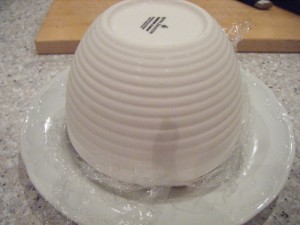 I held my breath while inverting the cake… and crossed my fingers! 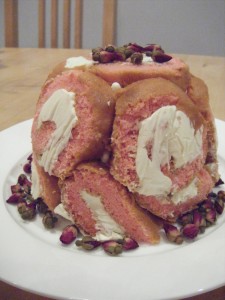 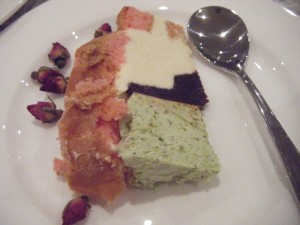 Thanks again Daring Bakers for a truly challenging  month! This is absolutely a recipe I will use again when the weather turns. However, I suspect I may return to my chocolate overload ways 😀

Alterations to the Recipe

I only slightly altered the recipe which you can find here.

1. I whipped my egg mixture for the swiss roll over a double boiler until it reached the desired consistency

2. I added about 4 or 5 teaspoons of rosewater to the vanilla icecream mixture instead of the vanilla

3. I added just over half a cup of pistachios (ground well) to the second ice cream mixture rather than adding cocoa or chocolate flavouring