Since I made my confession about strawberries I have been feeling lighter, less freakish, so good in fact that I feel I must make another confession. I love everything that comes with a traditional Christmas – turkey, ham, roasted veggies (particularly roasted veggies! mmmmmm…) cranberry sauce, mustard. Christmas lunch and dinner leaves me completely full and happy. However, and be prepared because you may not believe me when I say, I almost never eat dessert at Christmas. 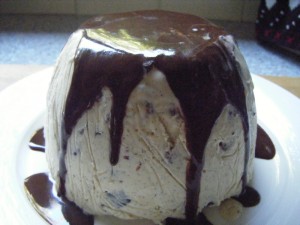 One of my birthday gifts from my beautiful mother was a Cuisinart Icecream Machine. I had been trying to make a decent icecream in it since November, but nothing was going to plan. Icecreams were too eggy, too icy, not setting, just plain sucky. This was going to be a Christmas showdown between me and that icecream. Armed with a recipe from the brilliant Guillaume Brahimi, I felt up to the challenge. 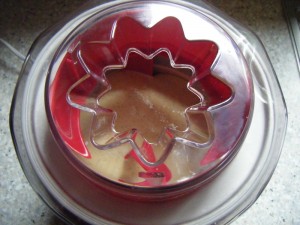 I followed the recipe exactly (I like to cut corners and substitute a bit here and there, but not this time baby!) 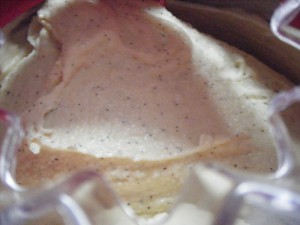 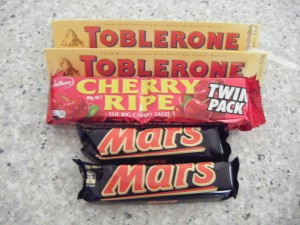 What else would it be?

Guillaume’s recipe uses Mars Bars and Toblerone but I wanted to add the Cherry Ripe to make it a bit more festive, and because they were sitting in my cupboard begging to be used. And who can ignore a cry for help from a poor little chocolate bar? I only used 1.5 bars of each type of chocolate 1. so I could snack without detracting from the finished product and 2. because, well, it was just too much to put 6 full bars of chocolate in 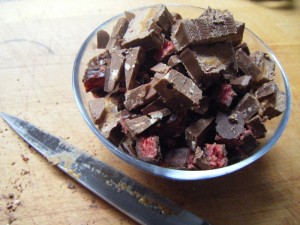 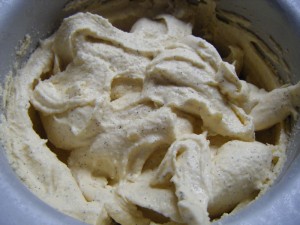 When the icecream was churned, I added the chocolate and poured it into the pudding basin 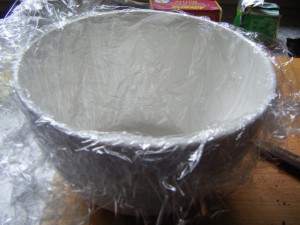 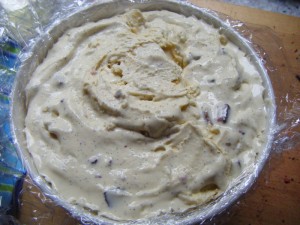 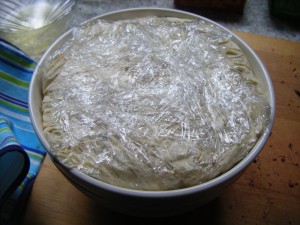 Like this! Then pop it in the freezer overnight to set properly

Even though I lined the pudding basin with cling wrap, I still needed to dip the bottom of the bowl in hot water for a few seconds to help it come out properly. I made a chocolate sauce to go with the pud because it didnt feel like the usual custard and cream would be appropriate. However, I won’t post the recipe because although it was ok, it wasnt amazing and therefore not blog worthy. 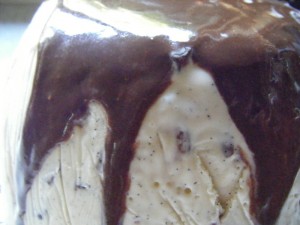 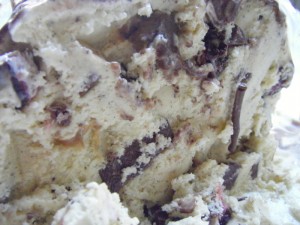 The icecream was smooth and creamy and vanilla-y and, studded with chocolate it was the perfect end to christmas day.

Although I made this recipe as a delicious christmas pud, you could do it in any shape or with any surprise. Im thinking M&Ms, nutella, snickers, oreos, the possibilities are endless! It’s almost like a Cold Rock at home. Mmmmmm…

So, my lovelies, if you made this icecream, what surprise would you add?

1. Bring the milk and cream to the boil

2. Slice the vanilla beans in half lengthways, scrape the seeds out and add to the milk and cream

3. In a separate bowl, whisk the egg yolks and sugar until well combined, then gradually add a third of the hot milk mixture and combine. Do this very gradually so as not to cook the eggs!

4. Put the egg and sugar mixture back into the pan with the remaining liquid and stir over medium heat until the custard reaches 80-85 degrees celsius or until it thickens enough to coat the back of the spoon

5. Immediately remove from heat and strain the mixture into a bowl (I had my bowl in an ice bath to make sure the mixture absolutely stopped cooking) and chill overnight

6. Churn in an icecream machine according to the manufacturer’s instructions. While the icecream is churning, line your mould with cling wrap leaving enough around the edges to fold over the top of the icecream

7. Once the icecream has reached desired consistency, stir in your chocolate and pour into the mould, folding the cling wrap over the top to protect it from the freezer. Freeze overnight or for 24 hours until set

8. To remove, dip the bottom of the mould in hot water for a few seconds and use the edges of the cling wrap to lift it out of the mould. Drizzle with the sauce of your choice and enjoy!