I don’t like change. I know thats an awful thing to admit, but when things change I feel all out of my depth. A little bit lost at sea.

By now i’ve gotten used to the fact that things like the seasons must change, the weather changes and traffic lights change (thank god). But i’ve never been able to get my head around the seasonality of fruit and vegetables. I hate wanting to make something with Mangos in June, and not being able to find nice fresh juicy ones in the store 🙁 So, in order to make the most of seasonal fruit and vege and educate myself a bit, i’ve been trying to eat and cook with things that are in season.

I have been quite neglectful of the humble Mandarin over the past few years. I had forgotten how sweet and juicy its segments are. How lusciously orange its juice is. 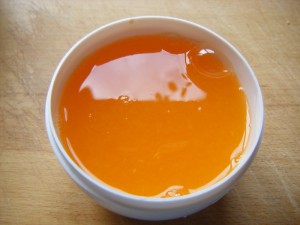 The recipe for Mandarin Syrup Cakes in the Good Living section of the paper was just what I was looking for. Why didn’t I think of it before? However, I am a little wary of newspaper recipes. They aren’t always the most reliable and something I think their writers omit a crucial ingredient or step on purpose! Who honestly wants to share their secret recipes with the nation? 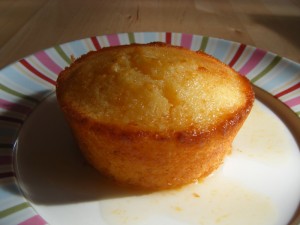 Have you ever seen such a beautiful simple little cake?

I shouldn’t have worried! These little babies came out wonderfully. They slipped out of the pan and stood proudly on the plate in all their buttery goodness, waiting for the syrup. Fluffy, moist and lightly mandarin-y, they were everything you could want in a cake. 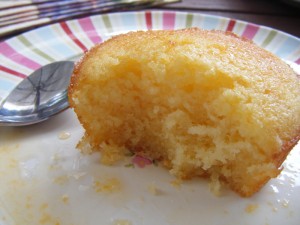 and of course, they didn’t last long!

The syrup was subtle and sweet. If you aren’t a fan of the tangy lime or lemon syrups, this is absolutely the one for you. I drizzled the syrup over the cakes after putting them on the plate. If you want the syrup to permeate deeper then I would syrup them when they are just out of the oven but still in the pan. Yum!!

1. Beat butter, half the sugar and zest in a small bowl until light and fluffy

2. Add eggs one at a time, beating well after each addition

3. Stir in flour and buttermilk

6. Combine mandarin juice and remaining sugar in a small saucepan over low heat until sugar is dissolved.

7. Simmer for two to three minutes or until it has thickened slightly

8. Remove from heat and stir in orange flower water

9. To serve, drizzle syrup over cakes and serve with cream or icecream (original recipe also suggests greek yoghurt, whatever floats your boat!)