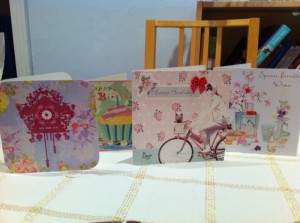 Time passes. We get older, and this year saw me approaching the grand old age of 25. However, with the impending arrival of this number I have been hearing increasingly about an interesting phenomenon. Ever since I read about the concept of the ‘Quarter Life Crisis’ I have thought about my 25th birthday with a curious combination of concern and excitement. As far as I can gauge, the Quarter Life Crisis is a result of Gen Y’s predilection for indecision and general faffing around before getting down to business. Apparently after spending years studying at university we get out into the workforce and realise that we hate our jobs and in fact want to go back and study something entirely different. We then have a bit of a melt down while realising that we have to take a significant pay cut and either have to move back home or continue living at home while we redirect our lives. This is often accompanied by a major relationship meltdown/marriage crisis/body clock crisis and a slow realisation that we will never again fit into the clothes that we fit into in our teens. Depressed yet?

Well, I hate to be the optimist but my 25th birthday earlier this week was accompanied by none of the above. Instead, I feel quietly content in my career, my relationships and, well, I am a little flabby but only because i’ve been eating so much amazing food over the past few weeks. So on that note, let me share with you some of the lovely happy things that happened on my birthday. 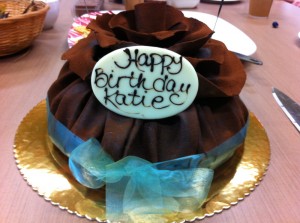 Amazing creation bought from a bakery in Five Dock by my co workers.

Not only does it look amazing and say my name, but inside it is cake and icecream! Hooray! 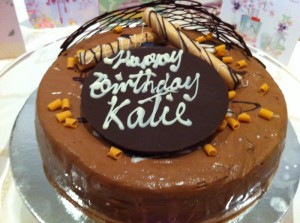 Hang on, rewind, ANOTHER cake? You bet!

This one purchased by my mum from the Pure Gelato shop in Croydon Park. Another ice cream cake, this one was chocolate and hazelnut and absolutely delicious! Well worth the flab. 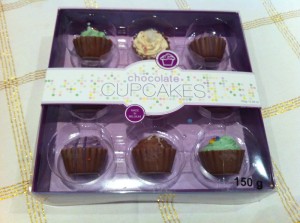 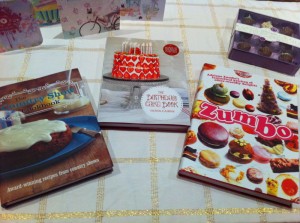 I received many beautiful gifts, although I only took photos of the food related ones to post here. The boyfriend gave me a beautiful set of mis-matched tea cups and saucers and hostess apron which should all get their own post soon(ish). His family gave me some lovely serving dishes and the Country Show Cookbook pictured above. Lucky we recently bought a new bookshelf to house the ever growing collection of cook books! My mum also gave me (among other things) the two other cook books above, The Birthday Cake Book and Zumbo by Adriano Zumbo. The former has given me many ideas for future cakes while the latter have given me much food for thought but has left me in abject terror at the prospect of actually attempting to make one of these magnificent creations. Watch this space!

Which leads me to my last picture which is pretty cool… 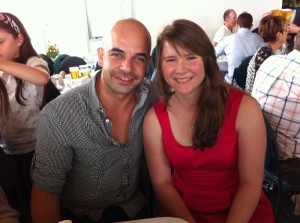 Mr Adriano Zumbo himself! Who I met at The Lakes while watching the Australian Open Golf Tournament. One of my idols and all time favourite chefs Who would have thought it? I almost fell off my chair in surprise! Just as charming as he is on tv, he was very gracious and lovely to talk to. Although I didn’t really do much talking.

I was a little bit star struck.

So, all in all, it was a pretty damn good birthday but i’m still stuck on what I should be doing for my quarter life crisis? I feel like I shouldn’t let this opportunity for legitimate drama pass me by. Do you have any suggestions my lovelies?