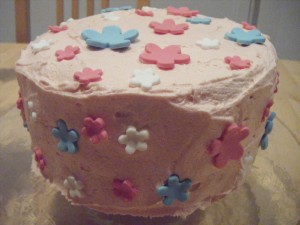 One of these days I think my kitchen bench is going to collapse under the weight of all my cook books. Truly. I love flipping through the glossy pages of perfectly styled pictures. I love coming across unexpected gems. I love the wonderful prose that accompanies so many cookbooks these days. Granted, Im not sure I need twenty different recipes for white sauce. But you can never have too many chocolate cake recipes! The quest for perfection never ends.

Whenever I feel guilty about how many cookbooks I have I always like to console myself with the fact that I have cooked at least something from every cookbook in my collect. At least I thought I had…

Last year my sister bought me the Magnolia Bakery Cookbook. Hooray! After my excitement wore off I was quickly put out by the complete lack of understandable measurements included in the book. Does anyone outside of America know how many grams one stick of butter is? Ok, so I can google it but how would you interpret “one package of instant pudding mix”? Which packet? Much much should it make? What kind of pudding? ARGH! Everything is also in cup measurements without being accompanied by gram or ounce equivalents. This would be fine, except that the measurement for American cups are different to Australian ones… uh oh.

So there it sat. Lonely and unloved on my bookshelf. Until it was called upon, one courageous wednesday afternoon, to create a truly amazing Vanilla Layer Cake.

I decided to take the plunge and do my best with the equipment and knowledge I had. The mix looked pretty good before it went into the oven, and when it came out, it looked even better! 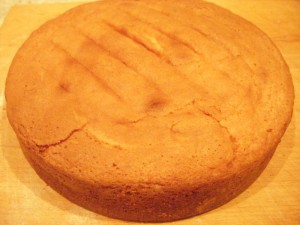 The mixture produced two flat but pretty tall cakes. I promptly cut their tops off to even them up, and cut them each in half. Cruel? Maybe. Thats just how I roll. 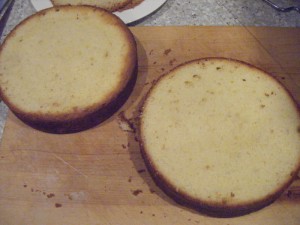 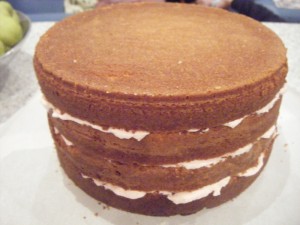 The next decision was what to use for a filling. After careful consideration I went with the very original choice of vanilla buttercream. Can you blame me? It was pink! 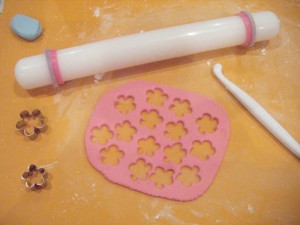 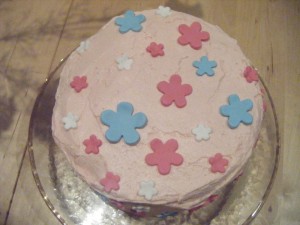 Then went to town!

I felt like there was still something missing from the decoration but as it was only a practice, I figured it would still be ok! And yes, my cake it a little slanty. But it was… erm… intentional? 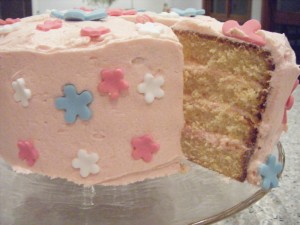 In the end I was left with a pretty pink four layer vanilla cake! It tasted pretty good too! 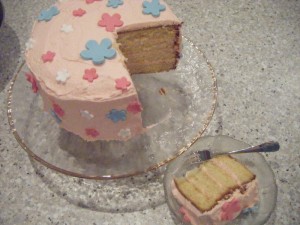 And it cuts pretty stable pieces. 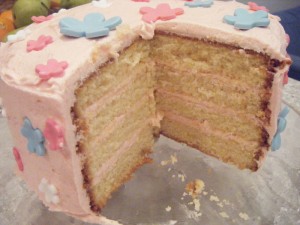 It also has a curious knack for disappearing incredibly quickly…

I have a theory. All food tastes better if its pink. Now, my lovelies, would you agree?

2. Cream the butter until smooth

3. Add sugar gradually and beat until fluffy (about 3 mins)

4. Add the eggs one at a time, beating well after each addition

5. combine the flours and add in four parts, alternating with the milk. Beat well after each addition

7. Divide batter between two 9 inch round cake pans (the recipe said 3 but I only had two and it worked out pretty damn well) and bake for 20-25 mins or until a skewer comes out clean

8. Let the cakes cool in the pans for ten minutes then remove from the pans and cool completely on a wire rack

9. cut into however many layers you wish and fill with your choice of filling!

1. Place butter in a large mixing bowl with four cups of icing sugar, milk and vanilla extract. Beat until smooth and creamy.

2. Add the remaining sugar one cup at a time, until the icing is the consistency you require (you might not need to add all the sugar, its all up to you) 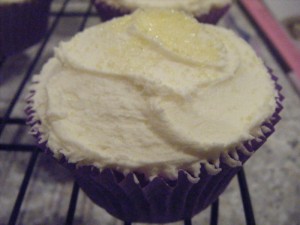 Everyone loves cupcakes. I hope! When bakeries established solely for the production of cupcakes broke on to the commercial cooking scene a few years ago I could hardly contain my delight. Although the naysayers are spelling the end of the boutique cupcake trend I fervently hope they stick around for many years to come (Cupcakes on Pitt im looking at you!!).

Cupcakes have got to be one of the most diverse and magic member of the cake family. Diverse because they can come in all shapes, sizes, flavours and colours, and magic because no matter how badly you stuff them up, they still look and taste pretty damn good. Unless you forget to put the eggs and milk in them… Anyway, I felt that I had become a bit too pedestrian with my cupcake flavours lately so I decided to branch out. Im not the most adventurous of people so my branching out only extended as far as experimenting with the icing. Baby steps!

END_OF_DOCUMENT_TOKEN_TO_BE_REPLACED 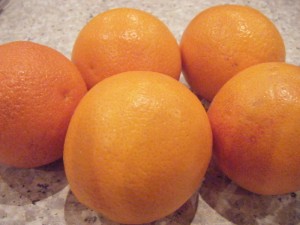 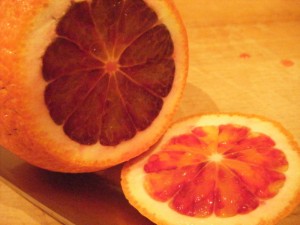 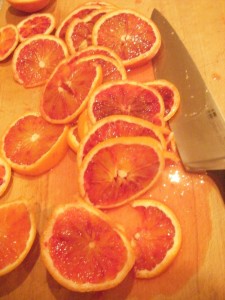 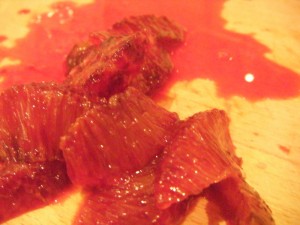 All in the name of dessert.

But oh my, it was a good dessert! This Blood Orange and Vanilla Syrup Cake was another experiment with seasonal winter fruits. I had been eyeing it off in my Seasons cookbook by Donna Hay since the mothership bought it for me last Christmas. As my weakness for all things citrusy and syrupy have been well documented on this blog, this cake was a natural progression from the basic syrup cake to a prettier, deeper flavoured dish.

Easy to prepare, this cake didn’t take long to cook and the only difficulty I had was getting the blood orange stains out of my chopping board! I didn’t realise that the gorgeous deep red juice would be so stubborn! I shook my fist at it. Then let the mothership shoot her tractorbeam of cleanliness at it. 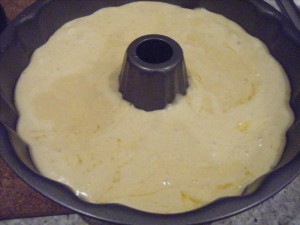 I broke out my bundt pan for this baby 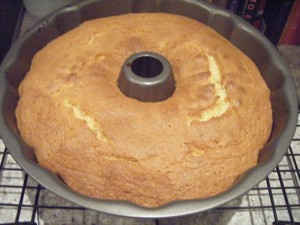 Note the abundance of progress shots. The deep red of the blood oranges was so beautiful that I got on a bit of a photo taking roll! I just wish that practise made perfect in this case. 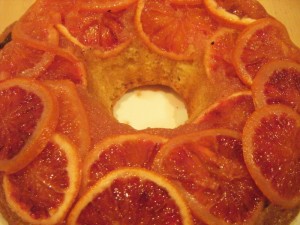 Finally, I have a pretty product to photograph. Excitement to the max.

1. Place sugar, water and vanilla in a frying pan over medium heat and stir until sugar has dissolved

2. Add orange slices and simmer for 10-15 mins or until the orange is soft. Remove from heat and set aside

1. Place eggs, sugar and vanilla in a bowl and beat until the mixture is thick, pale and triples in size (8-10 min)

2. Sift the flour over the egg mixture and fold through

3. Melt the butter and fold through the cake batter along with the almond meal

4. Line the bottom of a cake tin with the orange slices and remaining syrup. If you are using a spring form tin you might want to wrap your tin in aluminium foil or place a baking tray on the shelf below in the oven in case of any leakage

7. Turn out onto a platter to serve with cream or ice cream.