I’ve never been a morning person. I’m a chronic pusher of the snooze button. In fact, I have been known to sleep clear through my alarm. On several occasions. I frequently miss breakfast, my wardrobe is full of things that don’t need ironing and I snore. Well, snoring isn’t strictly relevant to my morning routine but hey, at least I’m honest.

So it might surprise you to know that for the last term i’ve been getting up half an hour earlier than usual in order to do some much needed exercise. As much as I love baking, I was not loving the squishy unable-to-fit-into-my-clothes feeling. Those of you who are fellow not-morning people will attest that the lure of warm sheets and sweet dreams often counteracts any good intentions re: exercise so I needed to come up with some strategies to tumble me willingly (or unwillingly) out of bed. 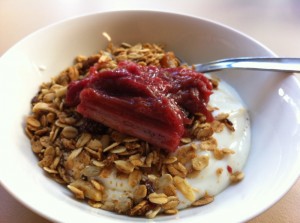 After not being able to find any cereals in the supermarket that weren’t loaded with sugar but actually tasted nice, I decided to make my own granola. After my morning exercise, I sprinkle some of this onto some vanilla yoghurt and then, if i’m super organised (or motivated) I top it off with some stewed rhubarb. Because how delicious is rhubarb!

I started with the rhubarb stewing after I had some rhubarb stalks left over from a cake I made. There were too many precious ruby stems to throw away, yet not enough to make another cake or tart. So I chopped the stems up into 2 inch lengths and whacked them into a saucepan along with one split and de-seeded vanilla bean and two tablespoons of caster sugar. I think that if you really wanted you could omit the sugar to make it healthier, but I quite enjoy the extra sweetness to balance out the tartness of the rhubarb. 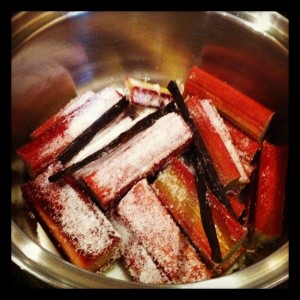 it really is as simple as that. Whack it all together over a medium heat 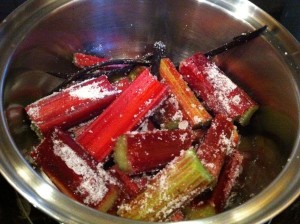 and marvel at all the pretty colours! 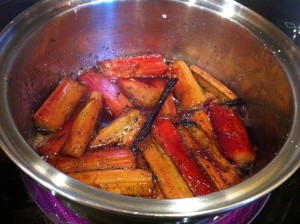 then simmer for 20 mins or until rhubarb is tender and all the sugar is dissolved.

As the mornings are becoming chilly. you could even reheat the rhubarb before adding it to your breakfast if you need a little bit of warmth. The other thing that you could do is to add warm milk instead of yoghurt then add your warmed up fruit. Either way, this is certainly a breakfast to get out of bed for!

So, my lovelies, are you a morning person? Or do you find yourself similarly cocooned in the warmth of your blankets and unable to wrench yourself free to begin the day?

3 stalks of rhubarb (you can increase the quantities if you want to make a bigger batch, just whack in an extra vanilla bean and a little more sugar)

1. Wash and trim your rhubarb stalks, then chop each stalk into 2 inch long pieces

2. Place rhubarb in a small saucepan along with sugar and the vanilla bean and seeds

3. Place saucepan over a medium heat and stir occasionally for 20 mins or until rhubarb is tender and the sugar has dissolved

5. Spoon rhubarb and sauce over cereal or ice-cream and store the rest of your fruit in an airtight container in the fridge for up to two weeks 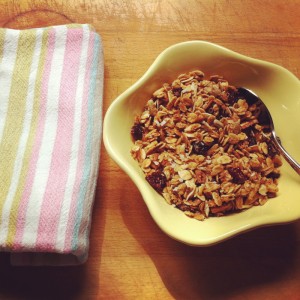 I’ve never been a big at-home-breakfast kinda girl. If I ate before leaving the house it would be a piece of nutella toast or two weetbix. But the times, they are a changin and so to must (some of) my eating habits. As I haven’t been able to squeeze any more time into my mornings I knew I would need to figure out a breakfast that was quick and easy to assemble. Unfortunately that meant I had to say goodbye to my fantasy of pancakes and crispy bacon 🙁 the natural replacement would have to be cereal.

If you’ve looked down the cereal aisle of the supermarket recently you might have noticed several things.

1. the number of cereals that have sugar as ingredient #1 or 2 in their list. A big bowl of sugar disguised as cereal is not exactly what I consider the best way to start the day

2. the sizes are are wildly out of proportion for a single person’s breakfast supplies. Either they are tiny tiny bags (accompanied by wildly inflated prices) which will require repurchasing within days, or they are massive boxes which I will never get through

3. the prices for anything that looks any good are ridiculously high. What is wrong with the world when the healthier the food the more expensive it is? How will that help anybody?

So the decision was made for me that I would have to make my own. Strangely enough, I already had all the ingredients necessary! 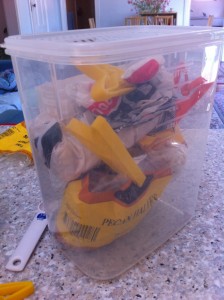 plus an assortment of nuts, seeds and dried fruits

And the method really couldn’t be easier. Whack on the oven, mix together your wet ingredients 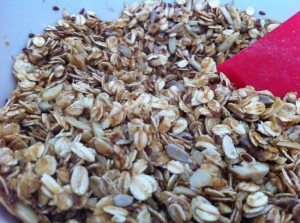 mix in everything except for the coconut and fruit 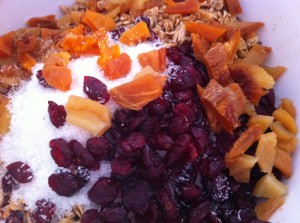 mix in your dried fruit and coconut, spread on two trays again and bake for another 10-15 mins until golden 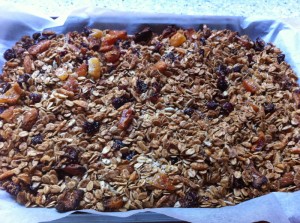 cool, and eat with milk or yoghurt!

The best thing about this recipe is that you can really add or subtract ingredients according to what you like or what you have on hand. You can also adjust the sweetness or substitute the maple syrup for something healthier (but why would you?)

I started off with this recipe but I think I adapted it enough that the recipe im going to post below I will call my own.

a sprinkle of cinnamon

1. Mix together your wet ingredients in a large bowl

2. Add everything except the dried fruit and coconut and mix well until all the ingredients are coated in your maple mix

3. If the ingredients look too dry, add another slug of maple syrup and mix well

4. sprinkle a little cinnamon (perhaps around 1/2 – 1 tsp depending on your taste) over the top and mix well

5. divide mixture between two trays covered with baking paper. Smooth in an even layer and bake at 150 degrees celsius for 15 mins or until lightly golden

6. Place mixture back into a large bowl and add the coconut and dried fruit, mix well

7. Spread mixture on trays again and bake for a further 10-15 mins or until golden. You might want to stir the mixture after 5 minutes to make sure it is cooking evenly

8. cool, then store in an airtight container.

9. serve with milk or sprinkled over yoghurt

So, my lovelies, what do you like to have for breakfast? Anything fancy? And if you do have something labour intensive, how on earth do you find the time?!